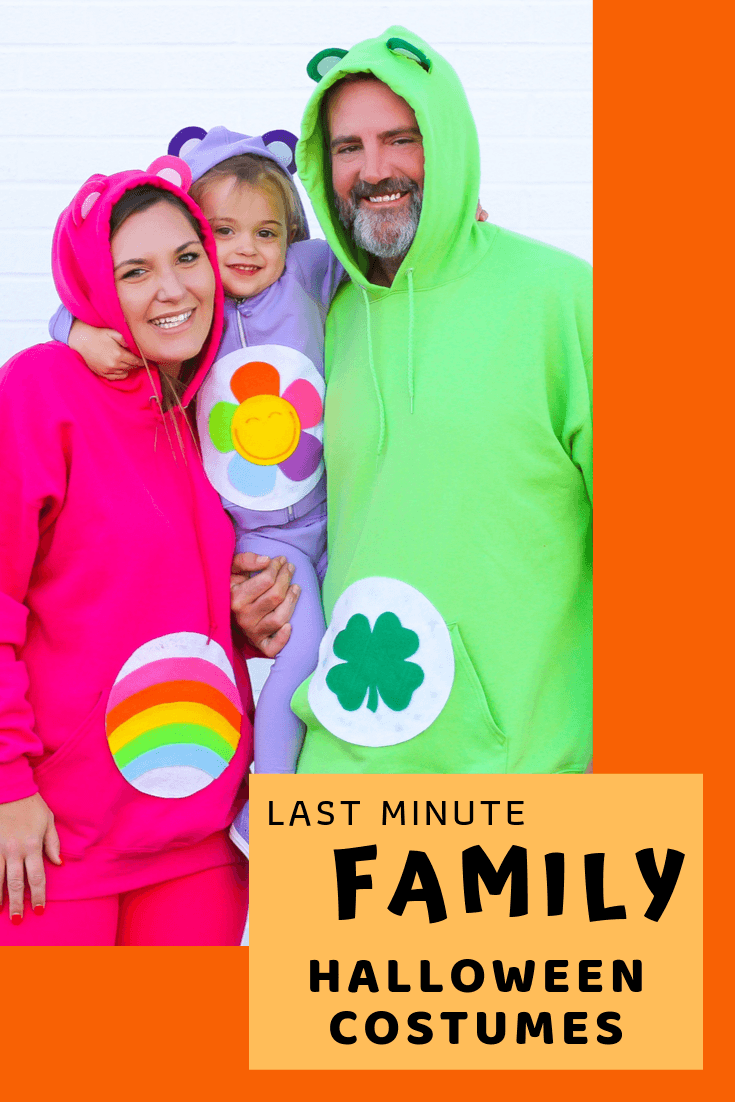 Halloween will be here before you know it, even more so since I’m getting this post up later than I wanted ha. But for everyone that already has your costumes bought or made- kudos for you! Unfortunately, I’m more a last-minute kinda gal so I end up frantically searching for ideas & throwing things together. Anyone else with me on that? If you are, then here are some super easy, last minute Halloween costume ideas for you or the family!

(Starting with the absolute simplest to the still very easy ones, just a bit more “work” needed) 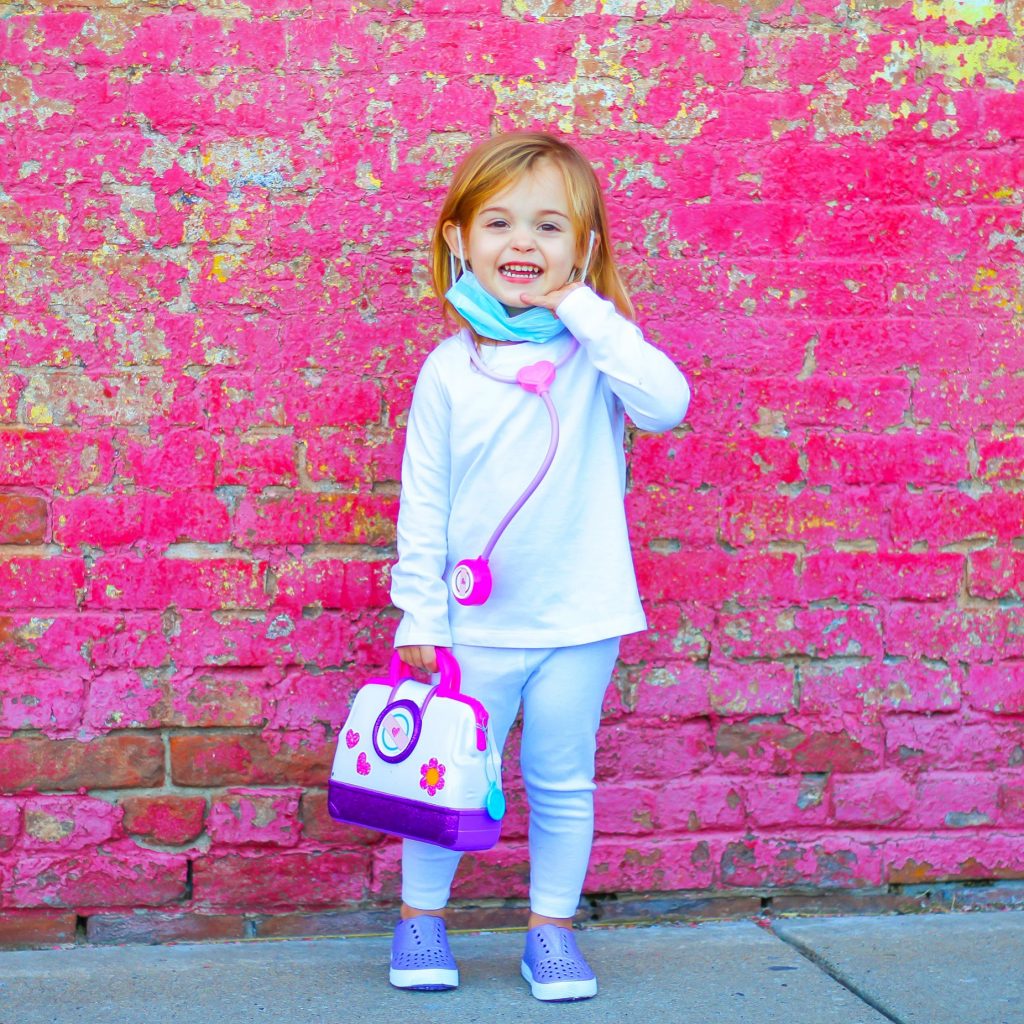 Whether this costume is just for the kids or the entire family, this is beyond the easiest Halloween costume I’ve ever thrown together. I had my daughter put on a white shirt with white leggings for the uniform, she wore “croc-style” shoes since I feel like most doctors or nurses wear them, used a toy doctor set she already had, and then I grabbed a face mask from the pharmacy. Seriously beyond easy and I think this turned out really cute! You could easily do the same with mom,dad, siblings, whoever to have an entire fleet of doctors and/or nurses. This was also the cheapest since we already had everything around the house except the doctors mask. 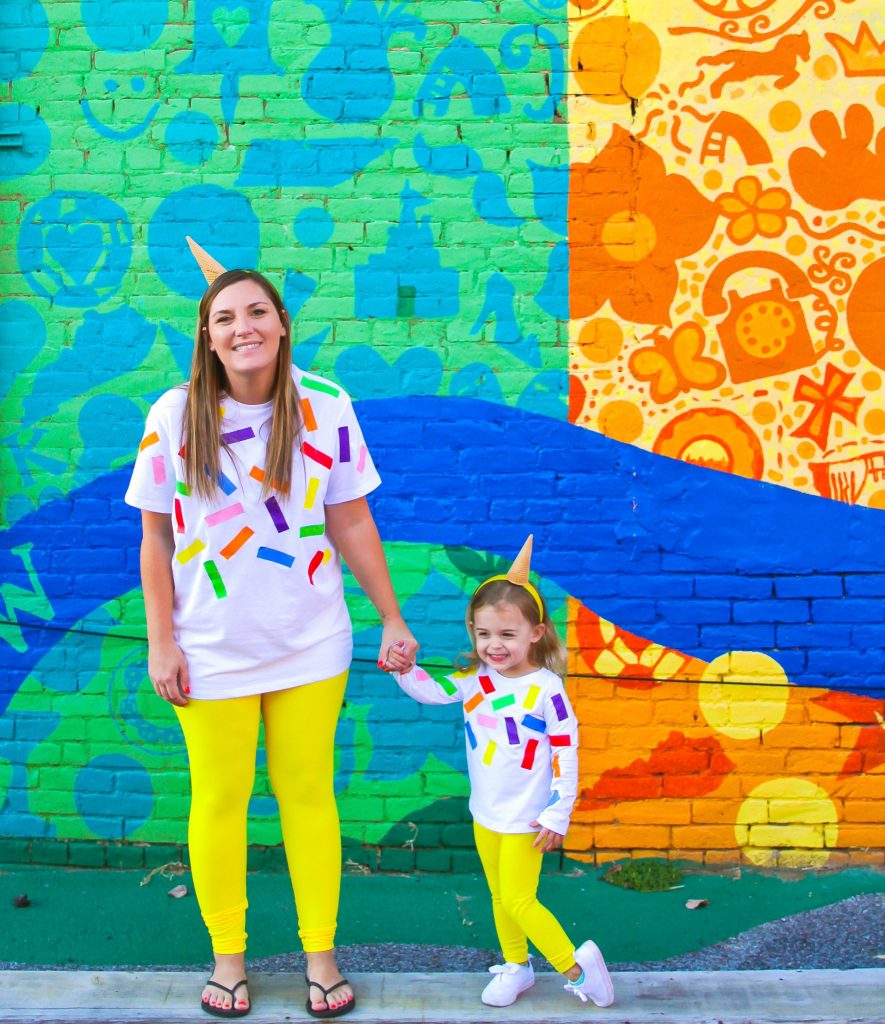 This costume idea is one that you could do a few different ways based on what you already have or wanna grab from the store. I used plain white t-shirts (that we already had) and used colored masking tape to make the sprinkles. I saw others online use fabric paint, felt, colored fabrics, and even just gluing paper strips on the tops for sprinkles. Besides from the fact that I already had colored masking tape at home to use making it no extra expense, it also completely comes off with no residue left over so you don’t ruin a white t-shirt. I used a couple of headbands & hot-glued sugar cones on them.

Note of caution though- if you drop the headbands the sugar cones are going to break, they are fragile! If this is a costume you’ll be wearing for awhile or for a child to go to school, party, etc in, I recommend using paper & rolling it up as a cone. This way it’s not going to shatter when dropped. The craft stores sell scrapbook paper that’s a sugar cone print. Another idea if you want to be more authenticate is to use light tan leggings instead of yellow. Ice Cream Cones are more tan/brown then yellow but I already had yellow leggings so it was cheaper for us to do this and it still gets the idea across. 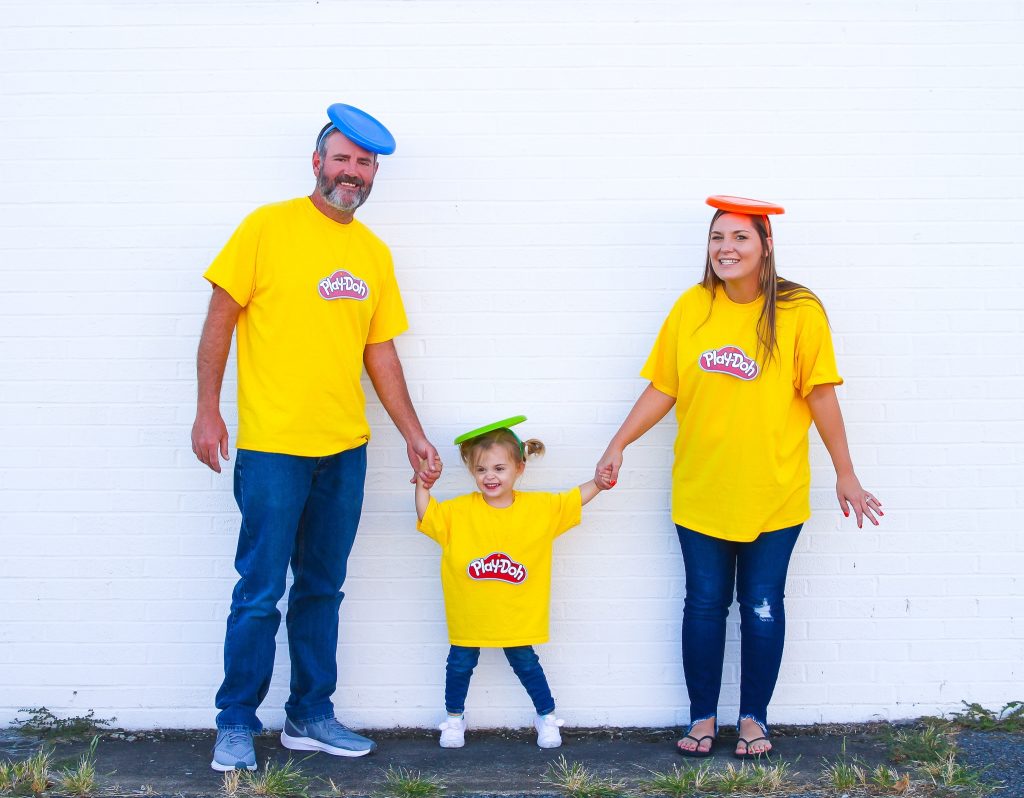 This is one of my favorites that we pulled together this year. It was also another pretty cheap costume option but could cost more depending on what you want to do. You can buy Playdoh t-shirts for around $20 each. I didn’t want to spend $60+ on shirts for all of us so I made it into a simple D-I-Y. I downloaded the Playdoh logo online and I had my local Office Depot print & laminate them. I put one hole punch at the top of the laminated logo and used yellow string to make a necklace. So as you can see in this photo,if you look really closely, we’re just wearing plain yellow t-shirts that were $5-8 a piece with the Playdoh necklace around our neck. Not only does this cost much less, it’s also a way to use the yellow shirts for something else another time. I took the headbands and hot-glued frisbees to them for the colored lids. 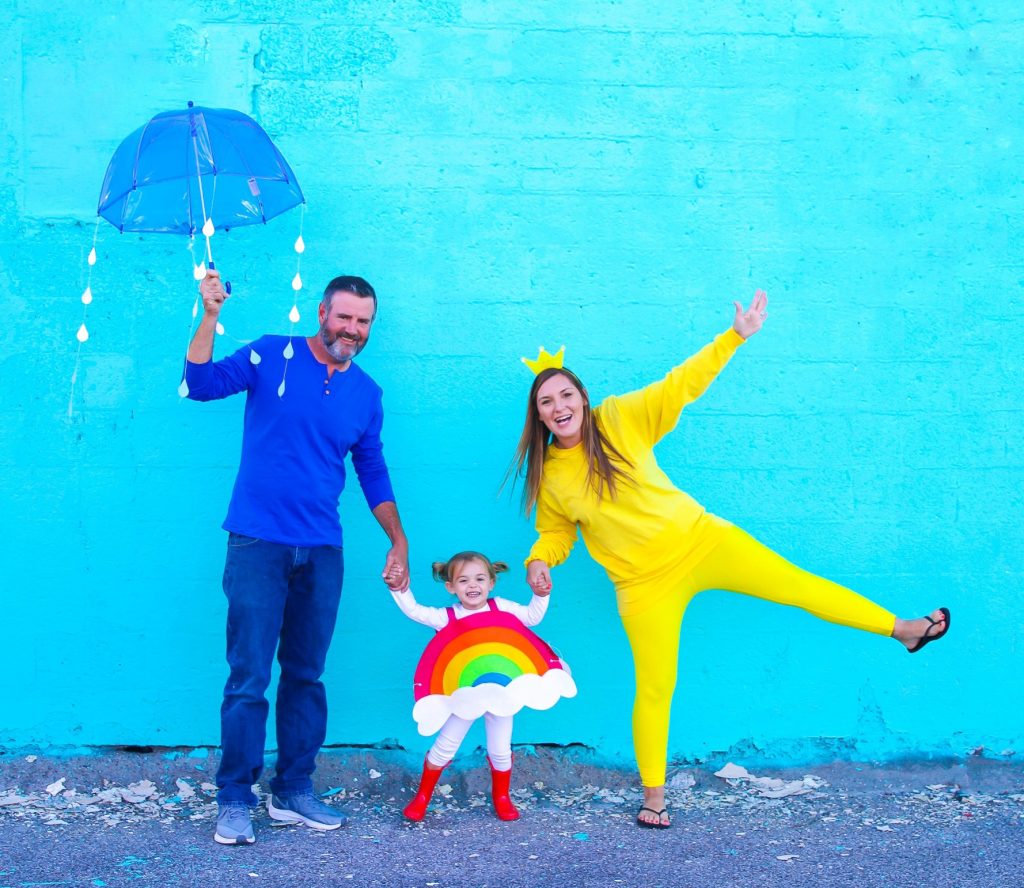 Here we have Rain, a Rainbow, and the Sun- adorable, right?! For Eric’s outfit, I had him wear blue jeans with a blue top he had. I bought a blue umbrella and tied raindrop garland to it.

For Cora, we actually already had the rainbow costume because this is what she was last year for Halloween. Side note- I always keep Halloween costumes to be able to re-use/re-purpose like this. Now I get most of you probably wouldn’t have a rainbow costume lying around but don’t worry, it’s not hard to pull something similar together. You can make the rainbow out of felt like ours is or use a poster board and color it with markers/paint. I even saw someone use a rainbow pillow and just put string through it to hang around the neck.

For my outfit, the Sun, I used a yellow long sleeve shirt and my yellow leggings I already had (same pair from ice cream costume). I grabbed a headpiece off amazon that was actually listed to be a yellow star headband to pull the look together. You could also make a sun out of poster board, felt, paper, etc depending on how crafty you are. 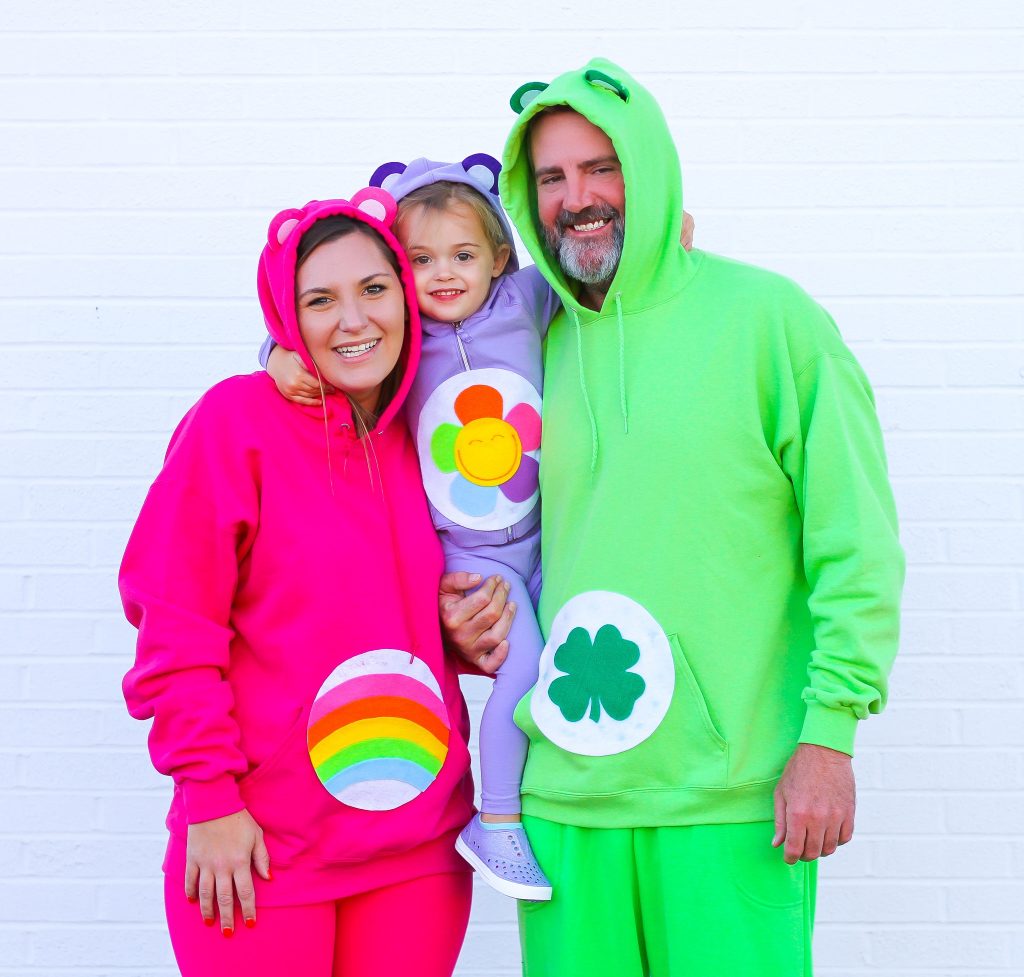 This was my initial plan for Halloween this year and what we’re actually going to dress up as when we go trick-or-treating. It’s probably the most expensive costume out of all these but with me saying that, it’s still way less expensive than buying full blown pre-made outfits for the entire family. For the Care Bear costumes, I ordered hoodies in each of the bear colors we wanted to be. Cora told me she had to be a purple Care Bear since purple is her favorite color lol. I found sweatpants or leggings in the same/similar colors to match the hoodies. The bellies & ears are made with felt, scissors, a hot glue gun, and LOVE of course haha. It’s all pretty darn easy honestly! I put the ears on head bands and cut holes through the hoods for them to stick out. This helps make sure your hoods, especially with an active toddler, won’t keep falling down.

A tip if you’re going to create your own Care Bear costumes- search for the hoodies and sweatpants before you make the felt bellies & ears. Based on what colors you can find easily for the outfits will help you determine which color Care Bears you’re going to be. It was actually pretty hard to find the green for Eric’s Shamrock Bear, I would have done a blue bear if I’d known it was gonna be like that.

That’s it guys 🙂 Hope our Halloween Costume Ideas give you some inspiration!

This post contains affiliate links. That means if you use them to make a purchase, I make a small commission. Thanks my darlings! 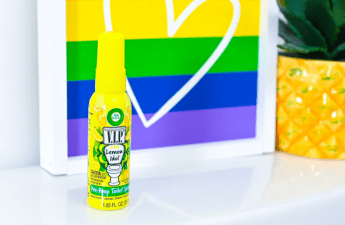 Every Party Has A Pooper, But You Don’t Need To Know It. 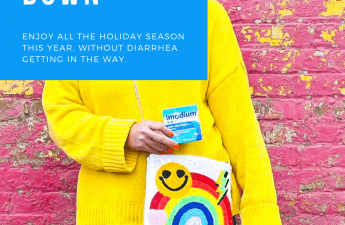 Don’t Let Diarrhea Slow You Down this Holiday 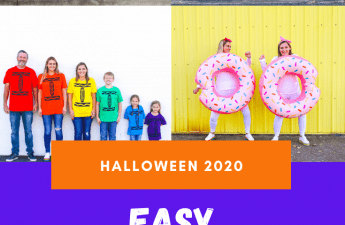 View all posts by parenthoodbabystyle →

Chicken Kabob Recipe🐓. . I have made a New Year

Lunch Time🍚. . I’m all about an easy lunch op

Spring Break is Booked🥳. . We may be 10weeks ou

A Fun Way to Learn📚 Interested in checking out 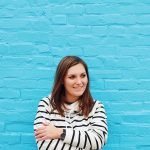 Hi Ya'll! I'm Tiffany, a 30yr old mom of one in good ole' Kentucky. I'm newly engaged to a wonderful man that has became the best father for my daughter. Speaking of Cora, she is my sweet, full of life, toddler that I love oh so much! I'm currently full-time working as an Internet Sales Manager at a dealership in our town. I love my job, but I DO...